The Old Hiltonian Club was founded in 1892, some 20 years after the establishment of our great school.

The club is run by an elected committee of ten members, all of which are Old Hiltonians who serve for a period of two years. I have recently taken over the chairmanship of the club and look forward to giving back to Hilton, an institution that has given me so much.

By way of background, I was at Hilton from 1988 – 1992, in Falcon House. After graduating from Stellenbosch University I have had careers in eco-tourism, investment banking, ICT and more recently as an entrepreneur focussed on impact investments. Although Johannesburg based, I travel extensively, spending a good deal of time in Kwa-Zulu Natal. Married with three children, my supportive family allow me to indulge my passion for wildlife and conservation, sport, current affairs and other just causes.

Many Old Hiltonians have lamented the lack of communication to them in recent times. A regular letter from myself is one of several initiatives being put in place to address this. I certainly hope to be in touch on at least a quarterly basis.

So why does the Old Hiltonian Club exist?

Its purpose has always been to engender collegiality amongst Old Hiltonians and friends of Hilton College. Furthermore, the club aims to uphold and perpetuate the good name and reputation of Hilton College; contribute to endowment raising initiatives in support of the school, and to represent the interests of Old Hiltonians on the board of governors of the Hiltonian Society N.P.C.

To most of us, the organs-of-state that make up Hilton can seem somewhat confusing. Simply put, Hilton is made up of the following four entities that co-operate for the greater good of Hilton and all its stakeholders;

The Hiltonian Society N.P.C. is a non-profit company, registered in terms of the South African Companies Act of 2008, which holds, as its major asset, Hilton College. It is made up of a board of directors, commonly referred to as governors. The chairman of the board is Advocate Alistair Franklin S.C. When a pupil matriculates at Hilton College and turns 18 years of age, he is entitled to apply to the Society to become a member, which is like being a shareholder in a company. This affords him the right to elect governors, attend the annual general meeting and to vote on any resolution tabled by the Society. By virtue of their membership of
the Society, in a sense, Old Hiltonians are the actual owners of Hilton College.

The school itself is an independent, full-boarding, all-boys secondary education institution that is run on a day-to-day basis by its headmaster and a body of senior staff members. In a company, this would be the equivalent of the chief executive officer and his or her executive committee members. The headmaster is Mr. George Harris. The school is entirely owned by The Hiltonian Society N.P.C.

The Hilton College Endowment Foundation is a separate legal entity from the other organs-of-state and is responsible for the independent management of the school’s financial endowments. The Foundation is managed by a separate and independent board currently chaired by Old Hiltonian Mr. Guy Haywood.

The Old Hiltonian Club – unlike the Society – is not a company, but instead is a recreational club constituted in accordance with a constitution and the South African Income Tax Act. It does not directly have a say in the day-to-day running of the school and neither can it dictate to the board, however, it does have significant influence. As the chairman of the Old Hiltonian Club, I sit on the board of governors of The Hiltonian Society N.P.C., ex officio. Spread out across the world are a number of branches or chapters of The Old Hiltonian Club, which are responsible for organising and facilitating events, for and on behalf of, Old Hiltonians and, more recently, the wider Hilton family.

It bears repeating, that in order for Hilton to thrive, these four organs-of-state need to work in close co-operation with each other, and I am pleased to report a particularly good working relationship between all of these entities.

This healthy climate of co-operation is most vividly illustrated by the goings on at the school itself. There is no doubt that Hilton is on a positive trajectory, with much to celebrate and be proud of across a number of disciplines. The recent matric results were heartening and indicate steady academic progress. The tremendous investment in sport has paid dividends with Hilton now amongst the top South African schools in most major sporting codes. Art, music and culture are also on the up. Encouragingly, the use of the estate is increasing. The settlement of the labour tenant matter towards the end of last year is a very positive achievement and illustrates the school’s commitment to social responsibility. Holistically speaking, I am confident that Hilton is in a good space.

Having said this, we cannot rest on our laurels – the current successes need to be amplified and areas of underperformance  improved. Institutions like Hilton need to be unapologetic for aspiring to be excellent.

As invested stakeholders of The Old Hiltonian Club, it is important that you are aware of the major initiatives being championed by the committee of the Club, these are as follows;

150th anniversary of the founding of Hilton College

In 2022, Hilton celebrates its 150th year of existence. This is a significant milestone by South African standards and an opportunity for both celebration and reflection. A tremendous amount of planning is going into ensuring that this milestone is appropriately commemorated. During the course of this year you will receive further details. In addition, the Old Hiltonian Club is working with the school on appointing a dedicated resource responsible for this project. In the meantime, I can tell you that the major celebratory events will take place from 27 April 2022 to 02 May 2022. Please diarise these dates – this will be a once in a lifetime opportunity for all Old Hiltonians.

Fundamental to engendering collegiality amongst Old Hiltonians are the various branch activities and class reunions that take place during the year. These include annual dinners, golf days, drinks evenings, as well as other sporting and recreational events. In support of these activities the Old Hiltonian Club has worked with the school in appointing a new events co-ordinator, Mrs. Carolyn van Zuydam who can be contacted at the school or via email at cvz@hiltoncollege.com

A growing number of Old Hiltonians have suggested that a digital networking platform that enables connectivity and collaboration between Old Hiltonians be put in place. Such an initiative is commonplace at equivalent schools around the world. Investigations are underway as to what an appropriate solution may look like. As chairman of the Club, please contact me if you would like to provide input on the project. Mrs. Amanda Pistorious continues to manage the alumni database of contact details and can be contacted at the school or via email at database@hiltoncollege.com

Great schools all over the world rely on acts of philanthropy and various other commercial endeavours in order to support a wide array of projects, including; facilities improvement, bursaries and scholarships and important social projects. The reason for this is that most schools are run as not-for-profit organisations, thus not generating any meaningful financial surplus. This is by design, so as to maximise affordability and hence accessibility. Hilton College is no exception. During the course of this year a detailed plan on growing The Hilton College Endowment Foundation will be shared with you, including the appointment of a Director of Advancement who will be responsible for this initiative.

In conclusion to my first letter of 2020, let me end with a challenge to you all – come and visit Hilton!

You will meet impressive young men ready to take their place in the world. You will meet professional teachers dedicated to their cause. You will find that the grounds – now more beautiful than ever – have been improved significantly with the development of the Vula Lodges, the Zungu Pavilion, the Centre for Innovation, additional sports fields and improvements to the boarding houses amongst many others. Make an effort to go onto the Estate, now known as the Hilton College Nature Reserve. By any standards, it is truly magnificent, and a wonderful place for reflection, reminding us all what a privilege it was to have attended this school, and to be part of the Hilton family.

Should any of you wish to discuss matters relevant to Hilton with me please feel free to contact me. 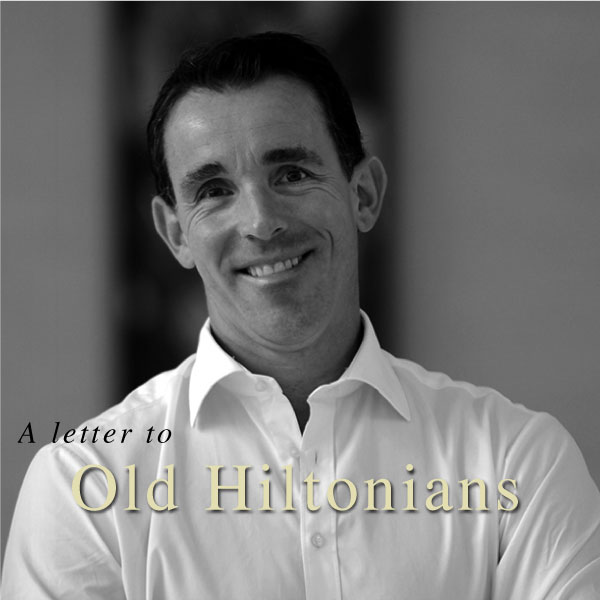